We have plenty of beeswax!

This is what 2.5kg of pure beeswax looks like.

One of the many advantages of Warré hives is that the bees draw new comb each season, meaning the wax is harvested as well as the honey. This produces a lot of lovey chemical-free wax!

(If you’re wondering about the strange patterns, this is the byproduct of pouring the filtered wax into containers that have water at the bottom, to stop the wax sticking.)

We do a variety of things with the wax, including hand lotion, home-made fire lighters and candles (of course!).

We still have plenty of wax left over, so knock on our door if you’d like to buy some for your own projects 🙂

This entry was posted in Beekeeping, Making our own and tagged beeswax, candles, natural beekeeping, Warré hive, wax.

Growing your own lilly pilly from foraged seeds

This is the season for lilly pillies (syzygium and acmena) to flower and fruit. And if you want a lilly pilly in your own garden, it’s easy: just find a local bush that has fruit you like the taste of.

The outer flesh of the fruit prevents germination, so eat that off. Then plant the seeds in some seed-raising mix. Wait and watch them grow!

We’ve found them to strike very easily and to grow vigorously. Once they get bigger, divide them into individual pots. Then transplant them into the garden when they’re ready.

These particular plants are Syzygium Leuhmanii, which have a crisp cinnamon taste. We’re growing a whole hedge of them down at the farm, from Lewisham-collected seeds 🙂 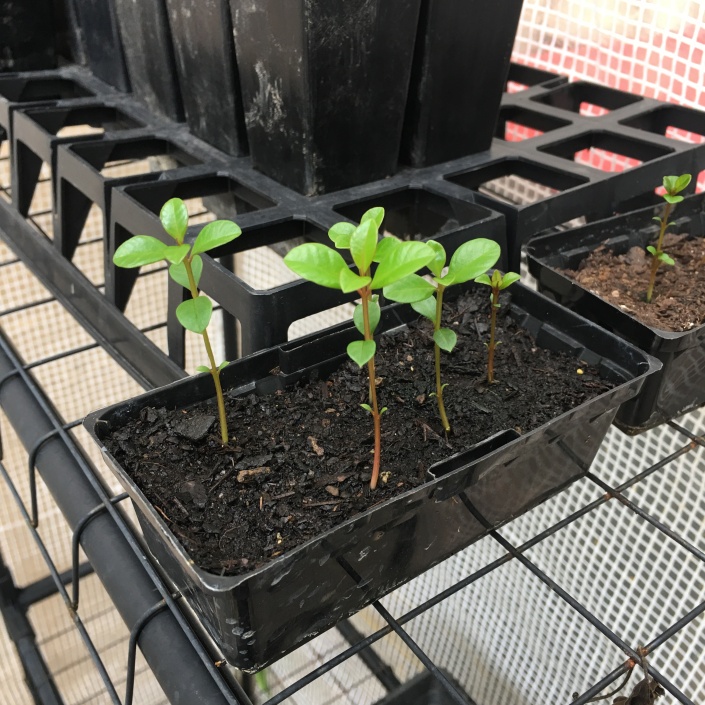 Rescuing bees from a compost bin

A week ago I received a call from someone just the other side of Lewisham, saying they had a bee problem. What I found was pretty funny!

Apparently a swarm of bees had taken residence in the backyard compost bin. In an effort to discourage them, the property owners removed the lid. Despite the difficult circumstances, however, they bees kept soldiering on.

The process of rescuing the bees is relatively straightforward. Going in with a knife and hands, the pieces of comb are carefully removed from the hive. They’re then rubber-banded into empty frames.

(You can see a mix of brood — baby bees — on the right, and partially filled honeycomb on the left.)

To encourage the bees to move into their new home, I placed the hive directly on top of the compost bin. Later that night, they apparently all moved into the hive without any complaints.

What’s amazing is that it’s possible to do all this without getting any stings! Despite me literally attacking their hive with a knife, they were relaxed throughout. Phew! (It doesn’t always go this smoothly.)

Last night, the bees were sealed into the hive, ready for their move down to the farm, joining the three hives already in place.

Once they were unsealed, the bees rapidly spread out to ‘re-map’ their new location. Within a few hours, they’d settled down, and this afternoon I did the final clean-ups of the hive, again without any angry bees.